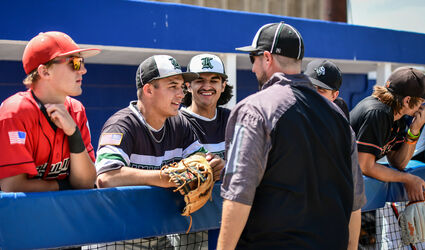 Jax Peterson and Marcos Molina talk with Coach Peterson during the all-star game in Douglas.

The second annual Wyoming Legion Baseball "A" All-Star game was played at the Nida Field in Douglas on Saturday.

The home run derby was hosted on Friday. The East team had the individual derby winner Jacob Russell from Douglas and the West took the win for the team derby.

A total of 51 players were chosen from teams to play the all-star g...