From page to stage in 24 hours 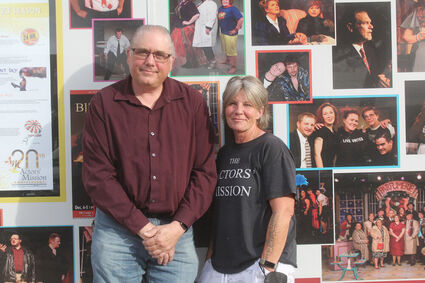 Actors' Mission members Shane Westfall and Nina Tyler stand in front of the photo collage on the outside of the Actors' Mission building on South Main Street in Rock Springs. Westfall and Tyler have been the driving forces behind making the 24-hour page to stage event happen.

Plays can take years to write and months to cast, rehearse, and perform. But next weekend, the Actors' Mission will fit the entire process into 24 hours.

"We're going to unlock the doors at six, and then we're going to stay there until about nine o'clock the following night for our 24-hour page to stage event," Nina Tyler explained.

"We want to invite everybody to come help us kick off our 2022 season and our 20th anniversary," Tyler said.

Westfall was first intrigued by the idea of a 24-hour playwriting event over a year ago, but it wasn't until he and Tyler started discussing it recently that it finally started coming together. Tyler noted the concept has also been brought up in past Actors' Mission discussions, but never happened until now.

"We wanted to do something quirky to kick off the 20th," Westfall explained.

"It's something new and fresh for this area," Tyler added.

The quick nature of the 24-hour event is a fun way for anyone to get involved, including those who couldn't normally commit to being in a full production, according to Westfall. Tyler also sees it as a great opportunity to expand and diversify the organization's membership, as well as to showcase local talent - something the Actors' Mission always strives to do.

This time it will be easy to share original works written by local playwrights, because everything will be original and brand-new, Tyler explained.

A company picnic in Bunning Park will kick off the event at 5 p.m. Friday, Aug. 19. Those who are currently involved with Actors' Mission and have been involved in the past will have the chance to gather for the alumni meal. After dinner, those who are interested will head to the Broadway Theater at 6 p.m. and meet up with anyone else who wants to participate in the 24-hour event.

The evening will start with a meet and greet for everyone to see who is available and what they are interested in doing. After everyone goes over guidelines together, there will be a set time period for playwrights to write, time for actors to get their scripts and start memorizing, time for everyone to come back together to start rehearsing, and then the performances.

"We kind of envision it as semi-organized chaos," Westfall said.

Over the 24 hours, participants will be free to come and go depending on when they are needed in the process. However, everyone is invited and encouraged to pull an all-nighter or camp out together at the theater.

"We'll set some space up in the Broadway for them to have community, to sit and visit, do whatever they want to do," Tyler said.

For those who are interested in writing, Actors' Mission will provide play script examples to show proper formatting and some computers and printers will be available. Writers will also be given guidelines for their plays based on what is available, including available actors and limited sets, props, and costumes.

The goal is to produce and perform several brand-new plays, with each being a one-act play about 15 minutes long.

Those who are interested in helping put on the new plays will also be given guidelines and the challenge of working in a short period of time. The 24-hour format allows for a collaborative experience between everyone involved, with the writers, directors, and actors working closely together to bring the piece to life.

To make the event a reality, the Actors' Mission is inviting anyone who wants to participate in any part of the process to come - and relying on people actually coming.

"We're looking for actors, writers, directors, crew," Tyler said, adding "we won't know exactly how we're going to set it up until we know who shows."

The amount of people who show up to participate, as well as what aspects of the show those people are interested in participating in, will determine how the event is structured. This is one of the reasons Westfall and Tyler were committed to doing a true 24-hour experience, since nothing can be planned ahead of time until you see who shows up to do what.

While Tyler admitted the uncertainty is a little scary, she's also excited to see what happens and thinks everyone will have "a blast."

"I think we're committed to just winging it," Westfall said. "And at the end of the day-"

"Won't we all be surprised!" Tyler interjected jokingly.

"At the end of the day," Westfall continued, "I'm confident that . . . we can put together something that's entertaining and do it the next night."

Come to the show

Writers, actors, directors, crew: Show up at the Broadway Theater at 6 p.m. Aug. 19

Audience: Show up at the Broadway Theater at 6 p.m. Aug. 20 for a complimentary meal before the performance at 7 p.m.

Admission is always free, but donations in honor of the 20th anniversary are welcomed!