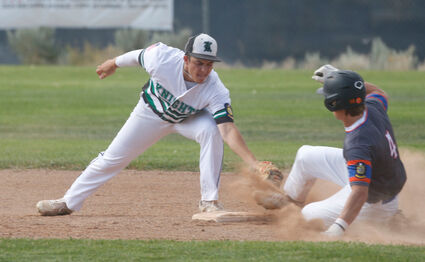 Shortstop Jax Peterson tags an out at second base during the State Tournament in Cody on Monday.

The 2022 West All-Conference American Legion Baseball announced the players that were chosen for this year's baseball season.

The state tournament started Monday, July 25, at the Milward L. Simpson Stadium in Cody. A total of eight teams are competing in a modified, double-elimination bracket. The Cody Cubs were the Class A State Champions last year.

In the first game the Powell...