"Concert at the Clocktower" series returns 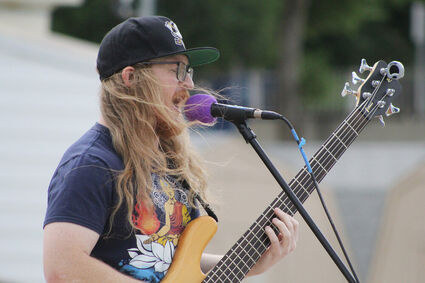 Micah Paisley was the first artist to perform for the "Concert at the Clocktower" series July 7.

Green River's "Concert at the Clocktower" series is back for the summer. The first concert was July 7, and the series will continue through at least the end of August with a concert every week except August 4, which is during the Sweetwater County Fair.

The concert series might continue into September, depending on conditions, according to Jennie Melvin, the Green River Urban Renewal Agency and Main Street administrator.

"We'll kind of play it by ear seeing how weather goes," Melvin said.

Melvin is also still in the process of booking bands for the summer concerts and is always looking for local talent to take part.

"I like to do the local acts as much as possible," Melvin explained. "There's a pretty regular rotation of local bands that play. So I do like to give them the chance to play outdoors because there's not a lot of chance for that. And people like to play the clock tower, because it's a cool little venue."

Melvin also likes to use the Concert at the Clocktower series as an opportunity for new bands or musicians who aren't used to playing in front of crowds to get more exposure and practice their craft in a smaller, more relaxed environment.

The summer concerts had a great turnout last year, even though attendance ebbs and flows each week depending on a variety of circumstances.

"We definitely learned that fair week is just not the week to have one. It's not fair to the artist," Melvin joked, explaining there's too much going on and attendance at the concert was low last year when everyone was at the fair.

While still learning lessons about putting on the event, Melvin expects the event to continue to grow as more people become aware of it.

"I think it's going to be better this year," she said.

When planning out the concerts, Melvin not only focuses on local artists but also tries to get a variety of performers. The concert series has featured everything from rock and country to heavy metal and new age.

"We try to keep it varied and change it up," Melvin explained.

Another thing that makes the concerts unique is the location at the clocktower and the sense of connection it gives.

"It's just really a cool vibe and fun and outdoors and it's just a nice little pocket of beauty in downtown Green River," Melvin said. "It gives you a sense of pride in your community. You get to know the people that exist in your community that you wouldn't otherwise know. It's really cool to find out that people that have this amount of talent are right here in your town."

The first talented local musician to kick off the concert series was Micah Paisley, who played a number of original songs, covers, and bass solos during his concert.

"He's really fun because he plays bass and he does so much original music," Melvin explained. "He does some covers, but it's totally his own rendition of them, so they're really fun. And he also plays guitar, he's also a great drummer. He's just a very talented musician. We have some great talent here in Sweetwater County."

Born and raised in Green River, Paisley started loving music because of his older brother. He started playing in bands in high school, and said he still plays with a few local bands, as well as playing on his own when the chance comes up.

Being part of the "Concert at the Clocktower" series is something Paisley enjoys because of the outdoor environment and the opportunities it gives for people to enjoy an event and artists to do what they love and support themselves with their art.

The "Concert at the Clocktower" series takes place Thursdays at 7 p.m. at Clock Tower Plaza on East Flaming Gorge Way.