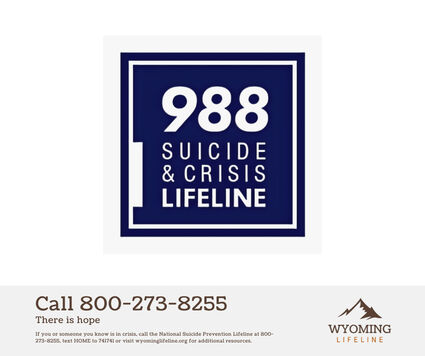 Last Saturday, the United States fully transitioned the 10-digit National Suicide Prevention Lifeline to 988 – a three-digit number anyone can call or text for crisis care. In Wyoming, those who dial this number for support will be now connected to a Wyoming representative no matter what time they call.

Governor Mark Gordon recently announced that the state's suicide lifeline services have been expanded and improved to offer full-time, Wyoming-based coverage 24 hours a day, every day.

"Wyoming citizens experiencing a mental health crisis and potentially suicidal thoughts, can now be confident that on the other end of the line, they're talking to someone who – as a fellow state resident – is familiar with our state and cares about our people," the Governor said.

While the U.S. National Suicide Prevention Lifeline has been available via phone for many years, calls from Wyoming residents before 2020 were answered by people outside the state. Wyoming-based services began that year, but hours were limited due to funding availability. Full-time, all-day, every-day Wyoming-based coverage started at the beginning of July. Governor Gordon asked the Legislature to fund the service and expand its availability during the 2022 legislative session and appreciates their support for this initiative, according to a press release from the governor's office.

"We are confident that the personal connection and the ability to make localized referrals for help will be improved when Wyoming folks can speak to an understanding person in their own state," Gordon added.

Stefan Johansson, Wyoming Department of Health director, encouraged people in distress and concerned about suicidal thoughts they may be having to call the lifeline for help.

"Talking with someone can make a difference. It can also be a good idea to call if you are worried about potential suicidal thoughts in a family member or close friend," Johansson said.

"Calls to both the new 988 number and the existing number will be answered," he said. "Our department staff plans to promote the new number and consider further lifeline service improvements over time."

The National Suicide Prevention Lifeline has existed since 2005, and the effort to change to the easier-to-remember 988 number was first proposed to Congress in 2019. The National Suicide Hotline Designation Act, signed into law after the passage of bipartisan legislation in 2020, authorized 988 as the new number for suicide and mental health crisis.

In 2021, the Lifeline received 3.6 million calls, chats, and texts. That number is expected to at least double within the first full year after the 988 transition.

The United States had one death by suicide every 11 minutes in 2020, according to the Centers for Disease Control and Prevention. Suicide was the second leading cause of death for young people aged 10-14 and 25-34. From April 2020 to 2021, more than 100,000 people died from drug overdoses.

Studies have shown that after speaking with a trained crisis counselor, most Lifeline callers are significantly more likely to feel less depressed, less suicidal, less overwhelmed, and more hopeful.

The Wyoming Lifeline website specifies people can call for more reasons than just feeling suicidal. Those who are experiencing other negative emotions or just wanting someone to talk to can call or text the Lifeline. Some topics people call to discuss include needing help with food and shelter, depression, fears, isolation, social pressure, abusive relationships, suicide ideation, addiction, bullying, discrimination and other situations.

"If you or a loved one need to talk, call us now," the Wyoming Lifeline website says. "Someone is always there for you on the other end of the line."

More information on community-based suicide prevention resources in Wyoming can be found online at https://health.wyo.gov/publichealth/prevention/wivpp/suicide-prevention/.