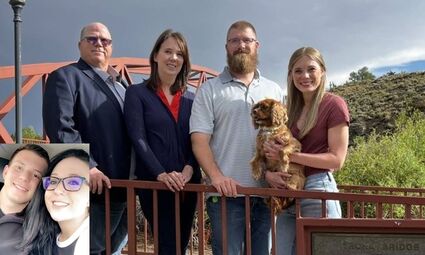 Stephen Allen stands with his wife Rachele and children Nicholas and Katherine. Also pictured is Stephen's daughter Caroline Smalsig and her husband Russell.

Allen is the husband of Rachele Unguren-Allen. They met at the University of Wyoming, married, and have resided in Sweetwater County for the past 33 years. They are grateful for their three children â€“ Katherine (Registered Nurse), Nicholas (US Coast Guard), and Caroline Smalstig (Teacher) who is married to Russell.

At the University of Wyoming Allen graduated with a Bachelors in International Studies in Economics and a Masters in Business, with Honors, from the American Military University. He also spent four years as an adjunct professor at Western Wyoming Community College teaching Economics, International Business, Business, Marketing, and Management Courses. He is a 20-year veteran of the US Army Reserves having served in Military Intelligence, Combat Arms, Training, and Administration.

Allen said he agrees with the Green River Star Editorial from June 9, 2022 that the Treasurer's Office requires qualified candidates as a key requirement to ensure a smooth transition of the office. Allen has spent the past 30 years as a business professional in finance, banking, investments, and managing multiple corporate clients as a contracted employee and consultant in five western states.

More importantly he believes that, "The servant-leader is a servant first ... and good leaders must first become good servants." (Robert K. Greenleaf, 1998)

"As Treasurer I serve all Sweetwater County Residents, the staff, commissioners, and all the agencies that receive funds from the public," Allen said, adding it is important that the Treasurer be a resource to everyone this position serves in providing quality forecasting and recommendations in the areas of finance, banking, and investments.

He also believes that all elected officials should serve their communities in order to stay connected with everyone they represent. Allen has been active in the communities of Green River, Rock Springs, Sweetwater County and the State of Wyoming.

Over the past 33 years he has participated in multiple fraternal and civic organizations, chambers of commerce, several boards and committees, coaching youth, Boy Scouts, and special projects such as the Memorial to the Unborn and the 141st Tank Memorials.

"The Treasurer's Office deserves a qualified, experienced, and servant leader to support the quality staff and residents of Sweetwater County," Allen said. "I would appreciate your vote on August 16."