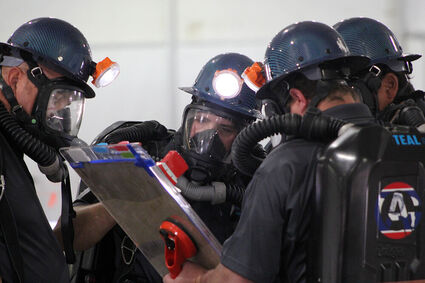 Peter Behling, the captain of the Genesis Teal mine rescue team, looks at a map with his team members in order to make a plan during field competiton. Genesis Teal took second place overall in field during a recent local mine rescue competition.

Local mine rescue teams recently practiced their skills and competed against one another during a four-day competition.

The competition was put on by Southwest Wyoming Mutual Aid (SWMA), an organization involving mine personnel who help train mine rescue teams and support mines in the region. The event was hosted at the Sweetwater Events Complex at the end of June.

Cindy Phillips, the SWMA treasurer, has been working with SWMA for 20 years, helping train miners on an air supply apparatuses and organizing mine rescue competitions.

"You cannot run a mine without a mine rescue team. You cann...