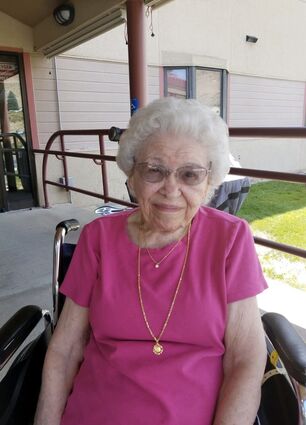 She was born April 8, 1925 in Rock Springs, Wyoming; the daughter of Harry Stewart and Mamie Brawley.

Mrs. Rauzi was a member of the Holy Spirit Catholic Community.

She loved spending time with her family especially her grandchildren. Mrs. Rauzi enjoyed crocheting and spending time at the Cabin. She delighted in getting her hair fixed, nails done and lunch with her friends.

Mrs. Rauzi was a great fan of Johnny Carson and Frank Sinatra.

She is preceded in death by her parents; spouse; two brothers, Buzz Stewart; Leo Stewart; three sisters, Pat Willis; Sharon Stewart and one who died in infancy; one granddaughter, Amie Scott and one great-grandson, Bradon Rizzi.

A Mass of Christian Burial will be conducted at 11:00 A.M. Tuesday, July 12, 2022 at Our Lady of Sorrows Catholic Church, 116 Broadway Street, Rock Springs, Wyoming. Friends may call one hour prior to service time at the Church. Graveside Services and Internment will be in the Rock Springs Municipal Cemetery.

Condolences may be left at http://www.vasefunerlhomes.com.