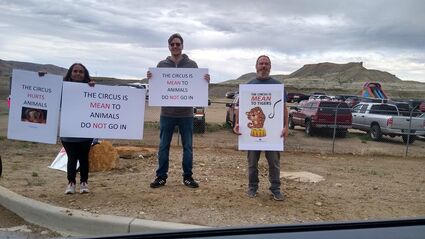 Madhu Anderson, Shane Siler and Steve Blunt hold up signs encouraging people not to attend the Culpepper and Merriweather Circus during a peaceful protest of the circus July 1.

A group of concerned residents from Wyoming Wildlife Protection Group got together to protest the Culpepper and Merriweather Circus when it came to Green River last weekend.

The protest was organized by Shane Siler, who was joined by Madhu Anderson from Rock Springs and Steve Blunt from Green River on the day of the circus. Conducting the peaceful protest was a last-minute decision made after a free tour of the circus facility, according to Anderson. Since the protest hadn't been planned beforehand, most group members weren't able to join on short notice. The small numbers didn't deter the three who were able to attend, however.

"We believe we should always speak up when we see animal cruelty anywhere, even if our voice shakes and we stand alone," Anderson said.

Anderson took the tour of the circus facility the morning of July 1, and said she saw two tigers and one lion in tiny enclosures. The top that was used to cover the enclosure area was thin and the animals were trying to hide in small shaded areas.

"One tiger named Delilah was pacing back and forth in her traveling cage," Anderson reported. "Another tiger named Solomon was in a cage barely bigger than his own body. Windell, the lion, was trying to be in the shade away from the sun as it was so hot."

Anderson previously expressed her opposition to the circus in the newspaper through a letter to the editor, but after the tour of the facilities, Siler decided to arrange the protest. 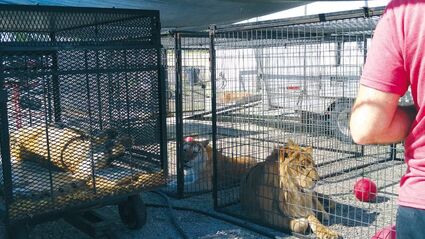 During a tour of the Culpepper and Merriweather Circus facility, Madhu Anderson observed animals in cages trying to rest in the shade.

"Traveling circuses like Culpepper and Merriweather force wild animals like lions and tigers to spend most of their lives in tiny cages traveling from town to town for shows," Siler said. "In addition, these animals are trained using physical violence. So we decided to do a peaceful protest to educate the community about this animal cruelty."

During the protest, which was held before both showings of the circus, the protesters held signs asking people not to support the circus because it exploits wild animals.

"We had a lot of positive conversations with people," Blunt said. "A couple of people decided not to attend the circus after talking to us and thanked us for being there. We got many thumbs-ups from people driving by. As a long-time resident of Green River, I know most people care about animals in my community. We need to bring awareness."