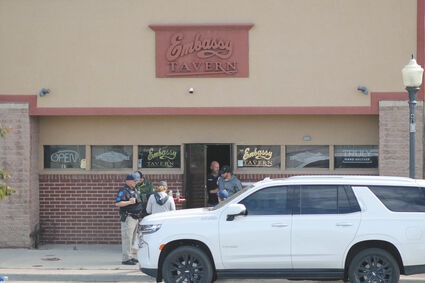 Investigators walk out of the Embassy Tavern Friday morning as law enforcement from multiple agencies piece together what led to a shooting Thursday night that led to two people being murdered and a third severely injured.

A shooting that occurred late last Thursday night resulted in two deaths and a manhunt for the shooter, which ended Friday afternoon with the shooter succumbing to apparent self-inflicted injuries.

Officers of the Green River Police Department were initially dispatched to a disturbance in the area of Riverview Drive Thursday night, according to a GRPD press release. Information received by dispatch indicated a subject at that location had pointed a pistol at the reporting party. As officers were responding to that call, a second call of an active shooter at the Embassy Tavern Bar was received. Officers arrived to find two persons dead and one wounded at the Embassy. The wounded person was transported to Memorial Hospital by ambulance.

The investigation indicates the disturbance call on Riverview Drive and the shooting at the Embassy Tavern were related, the GRPD said.

Officers from the Sweetwater County Sheriff's Office and the Rock Springs Police Department responded immediately to assist the GRPD as the situation unfolded. Agents from the Wyoming Division of Criminal Investigation and Federal Bureau of Investigation also assisted with the investigation.

Friday morning, the GRPD said witnesses had identified the suspect as Douglas Wolf, 51, of Green River. Law enforcement also urged the public to avoid the area from Elk Street and Yellowstone Road to Villa Lane north of Rock Springs since there was strong evidence Wolf was contained by officers of the SCSO and RSPD in an industrial area North of Rock Springs at the time.

Around 10:30 a.m. Friday, the GRPD and SCSO said the suspect had been located and was in custody and there was no further threat to residents north of Rock Springs.

Tactical teams including K9 units located the suspect in an unoccupied industrial building on Mesa Drive near Cathedral Drive north of Rock Springs. Wolf was alive and still in possession of the firearm, which was pointed at his head, according to the press release. Upon contact, officers observed blood and an apparent self-inflicted gunshot wound. As officers attempted to take him into custody, the suspect fired the weapon at himself. Tactical officers moved in and secured the weapon, then immediately began life-saving measures. The suspect was taken into custody and transported by ambulance to Sweetwater Memorial, where he was officially pronounced deceased shortly after 11 a.m.

"We are deeply saddened by the loss of lives that have been taken by this senseless act," the press release said. "Our thoughts go out to the friends and family of those affected by this tragedy."