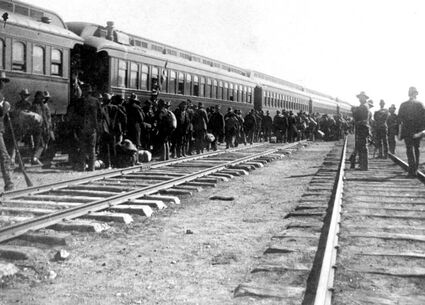 "The Wyoming March of Coxey's Army," by Brigida (Brie) Blasi of the University of Wyoming's American Heritage Center and the museum's former executive director, is the story of the movement that came to be known as "Coxey's Army," named for its leader, an Ohio businessman and labor activist named Jacob Coxey.

By the spring 1894, the four-year nationwide economic depression that became known as the Panic of 1893 was well underway. Unemployment was extremely high, and many protesting workers from around the country, loosely organized by Coxey and others, began traveling east by rail in what would become the first political march on Washington, D.C. 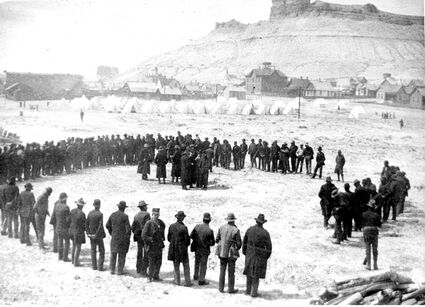 Under guard by federal troops, Coxeyites boarding the train in Green River for the return to Idaho to stand trial.

Most "Coxeyites" were peaceful and often welcomed by sympathizers as they traveled, but others were not. One contingent, numbering about 250, stole a train in Montpelier, Idaho, and wound up in Green River in May of 1894, where they were detained under guard in a tent camp by U.S. Marshal Joe Rankin and local law enforcement volunteers until troops could arrive to escort them back to Idaho, where all were found guilty and given minor sentences.

Coxey himself made it to Washington, but his demands that the federal government assist workers by employing them in public works projects were refused and he was arrested, charged with trespassing on public property. When he was taken into custody, his "army' dispersed.

WyoHistory.org, an outstanding resource Wyoming history, is the online platform for the Wyoming State Historical Society. Blasi's article can be found at https://www.wyohistory.org/encyclopedia/wyoming-march-coxeys-army.