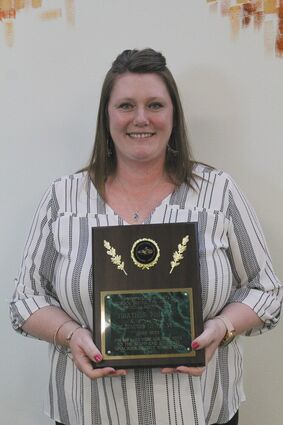 Heather Phillips holds her Teacher of the Year award she received from Sweetwater County School District No. 2 Tuesday night.

A second-grade teacher at Monroe Elementary School known for trying new things in the classroom was named Sweetwater County School District No. 2's Teacher of the Year.

Heather Phillips earned the accolade Tuesday night, receiving the award during the district board of trustees meeting. Phillips was one of eight nominees from throughout the district. Mike Aimone, the principal at Monroe, complimented Philips on her dedication to her students while introducing her to the board.

"She's always, always working hard for the kids," he said.

Aimone said Phillips is always trying to innovate how she teaches her students, saying the school often uses her as a Guinea pig to see how effective a new method is for her class room. Phillips said that willingness to try new things comes from wanting to help as many children as she can learn the material she teaches.

"In teaching, you have to realize there isn't a one-size-fits all (method) for kids," she said.

Phillips said she was shocked when she first learned about her nomination, saying it was an honor to be nominated by her peers in the district. The nomination letter submitted to the district highlights Phillips' classroom management and her work creating a "positive, safe, intuitive, challenging and fun" classroom. The letter further states Phillips' students enter third grade understanding the importance of reading and ready to learn third-grade content.

"Relationships with students and staff are a real strength of hers," the letter states. "Heather has created a positive impact on building climate in all schools in which she has worked."

Prior to being a teacher, Phillips worked as an aide at Washington Elementary. While she initially had a bachelor's degree in psychology, Phillips said she was encouraged by the principal to earn a second bachelor's in education after she fell in love with the kids and the culture within the school district. She enjoys working with smaller children so much, she doesn't see herself leaving elementary education.

"I never want to leave the second grade," Phillips said.

She said one of her favorite aspects of teaching second grade is listening to the kids tell her about their weekend, as they're always excited to talk about their activities with her. She said the excitement they bring to the classroom is another thing she enjoys about her work.

For Phillips, her work is meant to help children grow into adults and her task is teaching them the skills and tools they need to facilitate that growth.