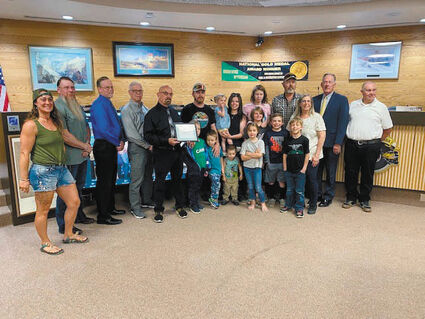 Courtesy of the City of Green River/Steve Core

"I didn't expect any of this," Ryan Pasborg said Tuesday night.

Pasborg is credited with saving the lives of Stephanie Wadsworth and her son Weston in Jamestown earlier this year when a house fire erupted at the Wadsworth home. Pasborg was late for an early-morning shift and recalls smelling something burning before noticing the house on fire. Driving to the home, he encountered three children outside who informed him that two people were still inside the home. Pasborg entered the home twice to save the child and his mother. Later, Pasborg and his fiancée gathered money to help pay for clo...