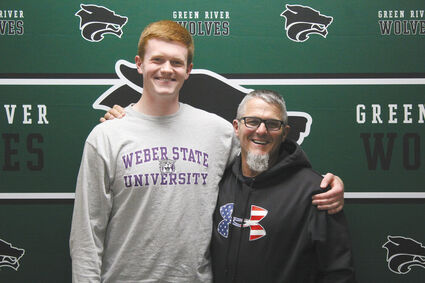 A Green River High School track and field athlete signed his letter of intent Tuesday to compete for Weber State University, an NCAA Division I university, following his mission.

Cole Murray competes in shot put and discus events for GRHS and will continue competing in those events when he becomes a Wildcat in 2024. Weber State is also his father's alma mater.

"I'm proud of him," his father Curg Murray said.

Cole said he plans to study mechanical engineering while at the university.

For Cole, the enjoyment of shot put and discus comes from the ability to be able to focus on strength and technique and not have to rely on anyone else. He also said the events don't require anyone to be tall to compete well, though a person's height can be beneficial.

Cole said one of the fondest memories of being in the Wolves track and field program came from when he and another throwing athlete had to share a full-sized bed at a Thermopolis hotel prior to a competition in Riverton. Remembering two large athletes attempting to sleep in a small bed causes Cole to laugh as he recounts the story. Overall, Cole said he enjoyed being a part of the team, and despite facing a lot of terrible weather, enjoyed being with his teammates and the coaches. Cole specifically said he is thankful for the coaching and advice head track coach Dan Hansen has given him over the years, saying Hansen was willing to work with him after practices to help him improve.

Hansen said Cole is the kind of athlete that has helped him become a better coach, saying Cole's desire to improve and learn has led to him improving how he coaches the team.

"We learned off of each other. He has made me a better coach," Hansen said. "He's put in a lot of dedication to the sport."

Hansen said other members of the team look up to Cole as a leader because of his dedication and his willingness to be a good teammate. Hansen said he is excited to see how Cole flourishes at the collegiate level.

Cole said the biggest things he will miss are his friends and GRHS itself, as well as living in Green River because of how close-knit the community is.