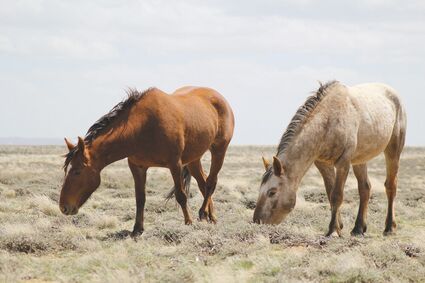 A pair of wild horses graze on White Mountain near Pilot Butte Friday afternoon. A proposal by the Bureau of Land Management would see the herd being left alone, though other herds in Southwest Wyoming would be removed.

A plan to manage wild horses in Southwestern Wyoming will result in many herds being removed from lands they're currently living on if approved by the Bureau of Land Management.

This new management plan, if approved, will see the forced removal of herds in many locations throughout Southwest Wyoming, leaving the herd living near Pilot Butte and the Wild Horse Loop Tour in the White Mountain Herd Management Area unaffected. Initially, the plan was to render the herd a non-reproducing herd, but the BLM has shifted away from that course of action.

The proposed plan was published in the Federal Register May 6, which started a 30-day public comment period for the plan.

Wild horses are featured in much of the iconography used throughout Sweetwater County. The Mustangs are Western Wyoming Community College's mascot and wild horses feature heavily in branding used by Memorial Hospital of Sweetwater County. The Run with the Horses Marathon is a long-standing event taking place during the annual River Festival in August.

Lisa Hererra, director of the Green River Chamber of Commerce, said visitors stopping into the Green River Visitors Center often ask about the area's wild horses. She said the chamber was involved in meetings with the BLM to discuss the importance of the horses to local tourism efforts.

A series of legal skirmishes

The move is the latest stemming from a long series of legal disputes between the BLM and the Rock Springs Grazing Association. According to a suit filed July 2021, the RSGA originally filed a suit settled in 1981 to have the BLM remove horses that had strayed onto a private portion of the checkerboard lands from Tipton to Bryan in an area the lawsuit identifies is 40 miles wide and 80 miles long "or about one third larger than the State of Delaware."

The RSGA owns or leases about 1 million acres of land within that area and under the 1971 Wild Free-Roaming Horses and Burros Act, the association can legally request the horses be relocated as landowners themselves are barred from doing so. As part of the 1981 ruling, the BLM was obligated to remove wild horses from grazing association lands with the exception of horses the association agreed to allow on its lands through 1979 agreements with Wild Horses Yes! and the International Society for the Protection of Mustangs and Burros. Those agreements specified the RSGA would allow up to 500 wild horses on its lands and that there would be no more than 1,500-1,600 wild horses in the Rock Springs district, including the 500 the grazing association would tolerate. The BLM incorporated those agreements into its management objections and later in its metrics for the number of horses allowed in its four herd management areas.

The grazing association filed a motion to show cause why the BLM shouldn't be held in contempt of court for not achieving the wild horse populations originally agreed upon. Following further discussions the BLM and RSGA reached an agreement where the BLM would commit to the removal of all but the 1,500-1,600 wild horses originally agreed upon and would dedicated 90% of its wild horse program funding for the following three years to reach that result.

The BLM said it had reached compliance with the court order, but the grazing association denied the BLM's claim, citing the estimated population to be at 1,737 and because the following foaling season would cause the BLM to be out of compliance.

A consent decree ending a lawsuit between the BLM and Wyoming in 2003 regarding the population of wild horses was signed, with the BLM agreeing to monitor horse populations and inventory and gather animals every three years to maintain what were considered appropriate management levels.

The RSGA filed a suit in 2010 claiming the BLM did not manage the horses in accordance to the 1971 Wild Free-Roaming Horses and Burros Act. The grazing association claimed the BLM failed to remove stray horses from lands owned by the association, an act it could request under the agreement.

A consent decree was approved in 2013 which dismissed the suit and required the BLM to evaluate how it manages horses on checkerboard lands through revisions of its resource management plans in the Rock Springs and Rawlins field offices, which led to the proposed plan the BLM is considering.