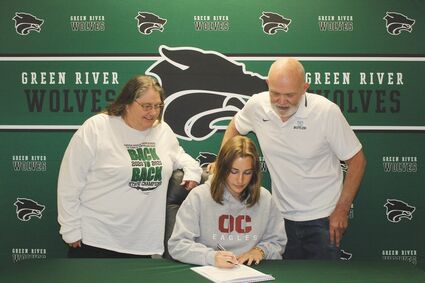 Green River High School swimmer Hailey Uhrig will be swimming in Oklahoma next year after signing a letter of intent to compete for Oklahoma Christian University.

Uhrig has earned multiple state championships in several events during her time as a high school swimmer and holds several school and state records.

Hailey said the facilities at the university and the campus itself helped solidify her decision. She had previously visited the University of Wyoming and Colorado State University before her visit to OCU. She plans to major in health science and seek a minor in business, wanting to become a nutritionist and athletic trainer working for her own business. Hailey said she started feeling burnt out with swimming recently, but the offer to continue competitive swimming was too tempting for her to turn down. She also said she continues to enjoy swimming regardless. Hailey said her favorite events are the 100-meter and 200-meter breaststroke competitions, saying they are the events she is best at.

Hailey admits she will miss high school competition. The two state titles she helped secure for the Lady Wolves will always be highlights for her, as well as the opportunity to compete with her sister Brianna. Hailey said she's grateful to coaches Colleen Seiloff and Randy Walker for the guidance they've given her over the years, as well as the support her parents have given her in a sport she has competed in since she was nine years old. Seiloff said Hailey was a part of a legacy of success the girls swimming program had not seen since the 1970s.

"She's been on the winningest team Green River has had," she said.

Seiloff said Hailey has always been a positive young woman and an important part of the team. She said Hailey could be giggly and lighten the mood for a team, but also get serious when she had to.

"You get a little bit of everything with her," she said.

Hailey's parents admit it will be hard to see her go so far away from home, but have pride in her for everything she's accomplished and what she plans to do after high school.

"She's put in a lot of work," he father Lucas said. "But, she's a better kid than a swimmer I think."