Wolves aim to pick themselves up against Rock Springs 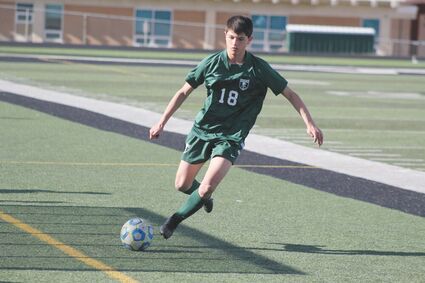 Guy Grace prepares to pass to another Green River player during action at home earlier in the season. The Wolves are looking to earn a second win against Rock Springs when they take the Tigers on at Tiger Stadium at 5 p.m.

An 8-0 loss to Jackson served as a wake-up call for the Wolves soccer program.

The boys travelled to Jackson Saturday following an away game in Star Valley last Thursday that resulted in a 1-1 overtime tie and saw one of the Braves being removed from the game due to a red card violation.

With Jackson, head soccer coach Jorge Salseco didn't mince words when it came to what led to the loss.

This loss comes after the Wolves were able to hold Jackson to only four goals when the Broncs visited Green River March 24.

Salcedo said the team has started slacking on...