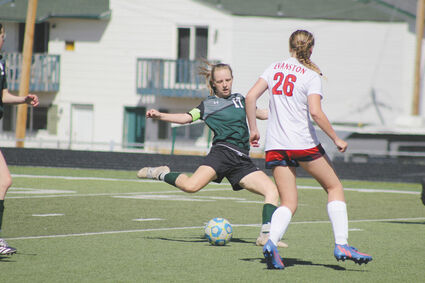 Senior Kiley Strange winds up for a powerful kick during action against Evanston's Lady Red Devils. The girls will have a rematch against them Friday, which will be a huge game to determine seeding at the upcoming regional tournament.

The Lady Wolves fought to keep up with their opponents during their first two games on the road, coming away with one tie and one loss.

The Green River High School Girls Soccer Team headed to Star Valley last Thursday, where they battled into overtime and ended the game with a 4-4 tie.

"It was a pretty physical match," coach Matthew Robles said of the game.

Robles explained the game was Star Valley's home opener, which the team was excited for, and the Lady Wolves' first away game, which led to them starting out tired after getting off the bus. Green River started the game down 2-0 at hal...