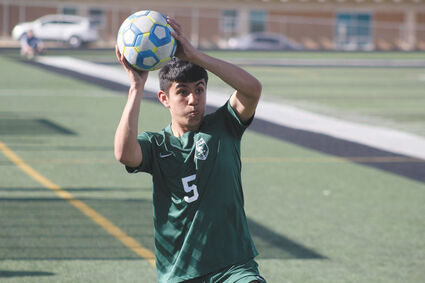 Diego Maya Garcia throws the ball back into play during action at Wolves Stadium against Evanston last week. The boys won the game 2-0.

The Wolves have made a turn around in the past week, earning three wins on the pitch. Last week, the boys defeated Star Valley 1-0 and followed that up with a win 2-0 against Evanston.

Tuesday, the boys slowed down Rock Springs' game and defeated the Tigers 2-0.

According to coach Jorge Salsedo, the boys' confidence has grown in the past few weeks as they compete better with their opponents. With Rock Springs, Salcedo said the boys followed through on the play the coaches and team drafted prior to the game.

He also noted some players have improved over the past few weeks and specifically...