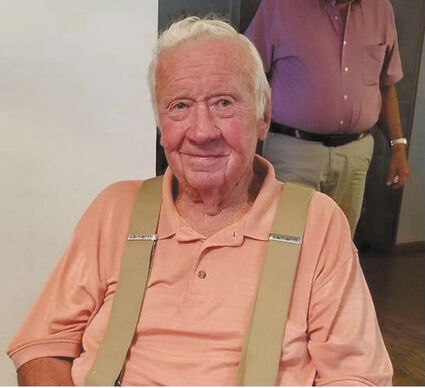 He was born August 8, 1932 in Milford, Nebraska; the son of Charles Schuck and Bessie Van Arsdale. His father passed when Dick was 7 and his mother passed when he was 4. His three sisters helped raise him.

He married Florence Francis in Buffalo, Wyoming in 1951 and she preceded him in death on April 29,1981. He later married Mary Knutson on January 16,1982

Mr. Schuck was a United States Army Veteran having served in the Korean Conflict. In 2017 he received a Korean Peace Medal.

Mr. Schuck began the first High School Building Trades Program in Wyoming, while working for Sweetwater County School District #2 for 13 years.. He was the Vocational Director at Western Wyoming Community College. He worked for Allied Chemical until 1981 as Employment Supervisor. After his retirement he worked as a General Contractor for many years.

He was a member of Jaycees and President for one year; Green River Lion's Club and President for 2 years. He was on the Green River City Council for four years. Mr. Schuck was District Director of the Wyoming Education Association. He owned the first membership at Rolling Green County Club. He was member of the American Legion, Thomas Whitmore Post 28.

He enjoyed spending time with friends and family, sharing many a beer around the fire, hunting, fishing, boating, working, camping, helping others, traveling, woodworking, and loved gambling; it was always double or nothing.

Funeral services for Schuck will be Monday at 11 a.m. at the Mt. of Olives Lutheran Church, 2916 Foothill Blvd., in Rock Springs, followed by graveside services at Riverview Cemetery in Green River. Immediately following the services, a celebration of life will take place at Tom Whitmore Post 28 at 38 North Center Street in Green River.