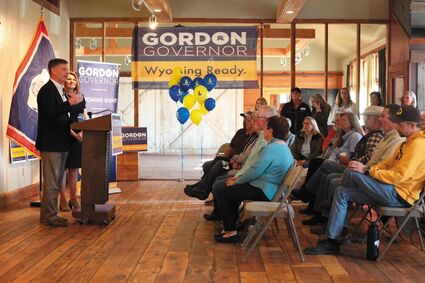 Gov. Mark Gordon announces his bid for reelection at the Cowboy Carousel on Monday in Buffalo. So far, no well-known candidates have announced plans to challenge him.

"I do believe that Wyoming is the best place on the Earth bar none, and I believe Wyoming's best days are ahead of it," said Gordon, a moderate Republican. "And that's because of you: the people of Wyoming."

Gordon's time in office has been challenging, and he's faced criticism from his party's right wing.

He angered many Wyomingites with a statewide mask mandate enacted during a COVID spike in December 2020. He lifted it...