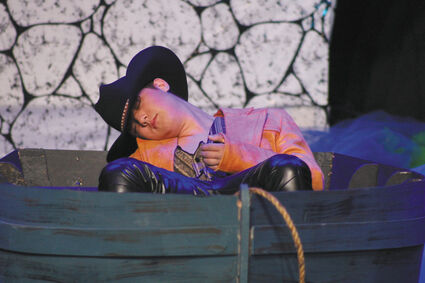 A "man of the night" sleeps in a boat at the dock before confronting Antipholus. The Courtesan character is typically female but is played by Owen Adams in Green River High School's genderswapped production of "A Comedy of Errors."

For what seems to be the first time, a classic Shakespeare play will be presented on the Green River High School theater stage this weekend when the students perform "A Comedy of Errors."

When he first got the idea to do a Shakespeare play, GRHS Theater Director Bradlee Skinner decided to look back to see if it had ever been done at the high school theater before. Skinner couldn't find any record that it had been, so he decided to go for it as a way to challenge the students but also present a classic work in an accessible way.

"Shakespeare is challenging, but most importantly, it's meant t...