The bank robbery wasn't a prank 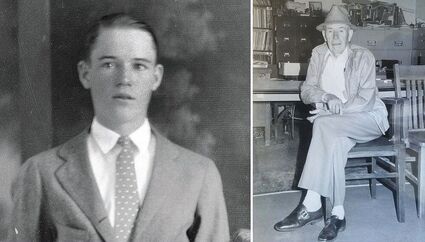 On the left, a young Ed Taliaferro is photographed. Telliaferro was a cashier tied up and left in the vault of the First National Bank during a robbery April 1, 1933. At the right is Taliaferro in 1985 during a visit to the Sweetwater County Historical Museum.

Almost exactly 89 years ago, on April 1, 1933, Green River residents were in the middle of the Great Depression and Prohibition, so times were hard. But even then, no one expected a bank robbery in the middle of a Saturday afternoon.

Ed Taliaferro certainly didn't expect to be held at gunpoint and tied up that April Fool's Day. The 29-year-old assistant cashier at the First National Bank was alone, locking up since the bank closed early on Saturdays. However, it wasn't uncommon for "old timers" to come in and talk with him, his father the bank president, and James Chrisman the cashier, even after the bank doors were closed, Taliaferro later recalled.

When Taliaferro heard a knock on the door, he went to see who was there. The man who knocked said he wanted to rent a house the bank managed. Before Taliaferro knew what was happening, another man was holding a gun to his head, and he realized there "wasn't much [he] could do but let them in."

The men forced Taliaferro into the vault, tied him up, and began to empty out the money. Taliaferro's main concern wasn't how much the bank would lose, however - it was making sure the robbers didn't lock him in the vault when they left, which could lead to his suffocation. Thankfully, the men left the vault unlocked as they made their getaway. Taliaferro was able to wear out the ropes restraining him on the safety deposit box shelves and call Chrisman.

After escaping, the cashier began telling his story to the police and any townspeople who were around and would listen.

Unfortunately, it took them a while to listen, understand and believe his story - maybe because it was April Fool's Day.

While Taliaferro tried to convince others the robbery had really occurred, the robbers got away with $19,720 in cash, currency and travelers checks (the equivalent of nearly $423,000 in 2022). While it was a good haul, $20,000 was less money than banks would typically keep on hand.

The First National Bank had only recently reopened after newly inaugurated President Franklin D. Roosevelt had temporarily closed Depression-stressed banks across the country to prevent runs on them.

The two robbers, Jim Stoddard and Harold Bradbury, made their getaway in a stolen Reo Sedan. They drove to Rock Springs and met up with James Ormsby Costin. In April, The Green River Star reported local authorities were in hot pursuit of the local bank bandits, and they eventually caught up to and arrested them in Laramie. By June the Star reported the robbers had been put under heavy bonds. All three were eventually tried for the bank robbery, where Costin was presented as the mastermind behind it all.

Costin had been living in Green River for several years and was working as a railroad machinist at the time of the robbery, but he'd already been arrested and been in prison multiple times in multiple states.

Just the previous year, Costin had been convicted of grand larceny for stealing $145 worth of coyote hides from the Rasmussen horse ranch south of Green River.

After the trials, Bradbury was acquitted because some witnesses couldn't positively identify him, but both Stoddard and Costin were sentenced to jail time. Costin didn't serve his full jail time, however, because he made a jailbreak from the Sweetwater County Jail in Green River along with two other prisoners almost a year after the robbery.

Sheriff Mike Dankowski tracked Costin to Denver and rearrested him, sending Costin to the Wyoming State Penitentiary in Rawlins.

There Costins told a story of being kidnapped while in Denver. The case was taken seriously and tried in Denver, and the men who kidnapped him were sentenced to jail time.

Costin was still sentenced to eight to 10 years for the First National Bank robbery, but ended up getting out early, after which he continued his life of crime in Wyoming and multiple other states. He never again robbed a bank in Green River though.

Much of the information about Costin and the April Fools Day bank robbery was collected and summarized by former Sweetwater County Historical Museum Executive Director Brigida R. (Brie) Blasi of the University of Wyoming's American Heritage Center and can be read in "A Bank Robbery and its Mastermind" on WyoHistory.org.

One of Blasi's main sources for the article was editions of The Green River Star from 1933 and 1934.