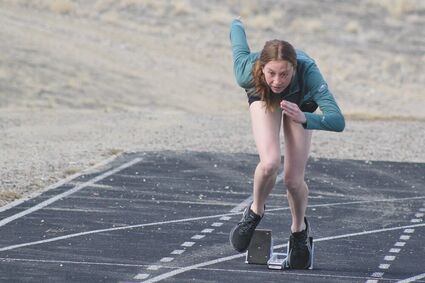 Kaelea Gibson practices running from a starting block Tuesday afternoon at the running track at Green River High School. Gibson, a senior, took third in the high jump event at the state indoor track meet earlier this year and has already qualified for state for the spring track season.

The outdoor track season has gotten off to a great start for the Green River Wolves.

Sporting a strong group of seniors who have been involved in the program since their freshman days, the team is looking to make a name for itself this season.

Head coach Dan Hansen said the team has worked very hard in the last three weeks of practice. Despite spring break taking place last week and late winter weather not supportive of outdoor track activities, Hansen said many of his athletes pushed through to better themselves.

"They are off to a great start in leading this team as a whole, which will help in developing our team towards higher levels," Hansen said.

Hansen said the core of the 55-person team is the senior group participating in the sport this year. He said one thing he looks forward to most this season is watching how the seniors will lead the team and inspire the younger athletes.

The team has four seniors that qualified in state track events during the 2021 season, three of which have already qualified for state events this year. Those who have qualified so far are Kaelea Gibson, Hayden Roberts and Lillian Munoz.

"We also have a few other athletes that qualified from the state meet last year whom we are looking at as very good talent for our team this year," he said.

Hansen said the team also has a fresh group of younger athletes he believes will "make some noise for the Wolves."

Overall, Hansen doesn't see the team having any particular strengths or weaknesses in track and field events, saying the team is fairly evenly spread across the various events.

"We are hoping to score points in a lot of different areas this track and field season," he said.