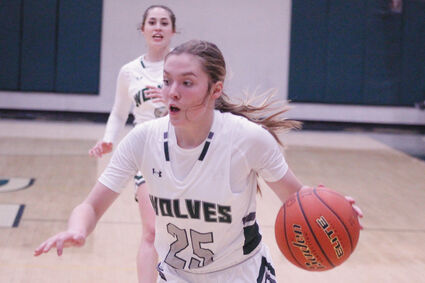 Sarah Wilson looks for an opening during action against Riverton in Green River. The girls team is seeded third in the 4A West Conference for the upcoming State basketball tournament.

The Lady Wolves will go into the state tournament in Casper this week in the third seed spot after winning three out of four games during last week's regional tournament.

"That's one of our goals for the year is to get to the state tournament and to see how well we can do there, so we're excited about reaching that goal," Coach Rick Carroll said. "Had to play some pretty good games, fairly close," he added.

The close games the Green River High School girls basketball team played at Regionals were won by only 12, seven and eight points, but the Lady Wolves fought to come out on top.