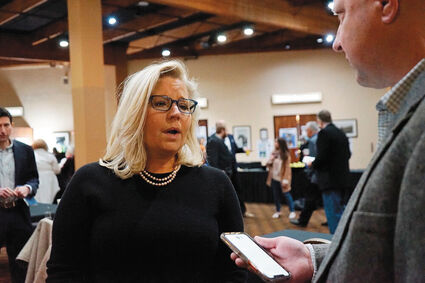 U.S. Rep. Liz Cheney speaks with a reporter while attending the Wyoming Press Association convention in Casper. Cheney's appearance followed a decision by the Republican National Committee to censure her for her work on a committee investigating the U.S. Capitol riots of Jan. 6, 2021.

Perry, an attorney, has the same profession as Hageman, who also attended the adult-prom themed "Conservatives in Crimson" gala. Hageman's appeal as a candidate to replace sitting U.S. House Rep. Liz Cheney stems not from their dealings in the courtroom, she said, but rather from getting to know her as a fellow Republican in the nation's least-populated state.

Hageman, Perry said, is "very bright," and "not going to be a fool."

The Sweetwater County resident holds less esteem for Cheney, who's become the beleaguered face of Republican opposition to Donald Trump and the former president's disproven claims of a stolen 2020 election.

"Everybody in Wyoming knows what happened with Liz Cheney," Perry said. "Almost all Republicans are astonished and appalled."

The idea of near-universal Republican disappointment with Cheney has become gospel in certain circles - so much so that the Republican National Committee last week named Hageman the presumptive nominee at the Wyoming GOP's urging. Conversations in Rock Springs and a Cheney-attended event in Casper Saturday, however, suggest a more nuanced landscape of opinion.

Although the three-term congresswoman's name was never uttered during the Saturday night shindig, a fundraiser for the Republican Parties of Uinta, Sweetwater and Carbon counties, the event began with anti-Cheney allusions. Carbon County Republican Party Chairman Joey Correnti, who emceed the event, told the audience that he would be remiss not to get a "little into" politics. He recounted numerous county parties' denunciation of the incumbent, which preceded the Wyoming Republican Party's central committee's vote to no longer recognize her as a member of the GOP - a statement that the national committee has now echoed.

"Two days ago the RNC, for the first time in its history, took those resolutions that originated from small rural areas - and were the true voice of the grassroots - and held accountable two sitting members of the United States Congress, and no longer recognized them as Republicans," Correnti said.

The RNC's special resolution zeroed in on Cheney and Adam Kinzinger (R-Illinois). Along with censuring the two, the committee recognized Trump-endorsed Hageman as the party's "presumptive nominee," a move the Wyoming GOP supported, potentially in violation of state election law.

For Correnti, the national committee's action is a source of pride: "That is what I'm here to celebrate tonight," he said before choking up with emotion.

The name of Hageman, like Cheney, was never uttered on stage Saturday night, and she gave no public remarks. For hours that evening she moseyed around, caught up with old friends, unwound and took in what she felt was "an enormous amount of support."

Hageman told WyoFile she had no role in the Republican National Committee's action. She was making dinner when word came in that the party leadership, meeting in Salt Lake City, had declared her the presumptive nominee, she said.

"I haven't seen anything, and I don't know anything about that," Hageman said. "The encouraging news for me was censuring both of those two [Cheney and Kinzinger] for the work that they've done."

Hageman's selection as the presumptive nominee from a field of fellow Cheney challengers figures to help fundraising, where the incumbent has a commanding seven-to-one cash-in-hand lead.

"Seven-to-one doesn't make any difference if she can't come to the state and talk to her constituents," she said.

Some 175 miles to the northeast, Cheney was doing just that, albeit with a different crowd. She mingled with reporters, editors and publishers of the state's newspapers who were gathered at the Ramkota Hotel & Conference Center in Casper Saturday for the Wyoming Press Association's annual convention. She did not soften the critical stance on Trump that has thrust her in the center of a national controversy, calling his actions "fundamentally such a dereliction of duty."

The RNC's attempt to declare Hageman the presumptive Republican nominee in the race will not be successful, Cheney told WyoFile.

Despite pushback from her own party at the national and state levels, most Wyoming voters understand the danger that the Jan. 6, 2021 attack on the Capitol presents to the republic, Cheney said. She didn't elaborate about how voter backlash to her stance might play out in her reelection campaign.

Be it pandemic recovery, energy or inflation, Wyoming's issues "require that we be able to have a really vigorous public debate and that we be able to stand on principle and to fight for those issues," she said. "And if we look the other way, if we pretend that January 6 was not an effort to overturn an election, then we really are facilitating the unraveling of the foundations that allow us to have the debates we have to have about everything else."

She couched her reaction to Jan. 6 as imperative to her obligation as a representative, and said the people of Wyoming also care about the issues at stake.

Later, in remarks to the entire room, Cheney reported that she is spending a significant amount of time on the select committee investigating the 2021 attack on the Capitol.

"That committee, and that set of issues, is so crucially important," Cheney said. "And it's so important because it has to be above politics. And the fundamental issue for me is that America always has to be a place where we have a peaceful transfer of power, the peaceful transition of power is at the heart of who we are. And we all have to be committed to the sanctity of our election process.

"The lies that were told about the election, and the effort that went into trying to overturn the election, are fundamentally dangerous to who we are as a country, and dangerous to our ability to defend all of our other constitutional rights," she said.

It is essential to defend those institutions, she said, "no matter what party is threatening them."

She often hears her state is very pro-Trump, she said. "And I say, I know. That's exactly right. And I was pro-Trump, and I am pro the policies of the Trump administration, but he crossed a line you can never cross.

Hageman likened Cheney's tactics toward Trump to "a dirty fighter." Even before her rebuttal of the former president's claims of a stolen election, Wyoming's representative had gained a reputation as one of the congressional Republicans quickest to challenge Trump.

"She'd run in and land a punch, and then run back out again," Hageman said.

Hageman, a longtime natural resources attorney, said her campaign isn't about not being Cheney. The sitting congresswoman rarely comes up, she said, when she's making her campaign rounds - and her website touts driving 9,000-plus miles to meet with voters in all 23 counties.

Not everyone at the gala counted themselves in the Hageman camp. For starters, two other Cheney challengers were present: Retired U.S. Army colonel Denton Knapp and Sheridan resident Robyn Belinskey.

Belinskey said although she "may not be in the limelight on Fox," she's still setting her sights on the primary election. The pro-Trump candidate who drives an unmistakable sedan adorned with a "don't tread on me" bumper decal didn't file campaign finance data with the Federal Elections Commission.

Knapp, meanwhile, said his campaign is still ramping up. After Trump endorsed Hageman, he got calls and emails asking him to drop out.

"I said, 'No, I think I'm a better candidate,'" he said. "Wyoming gets a choice. It's not an appointment or an anointment, it's an election."

Knapp took issue with the Wyoming GOP central committee partaking in the national committee's resolution. To him, it's "a violation of state law."

"There's a state statute that states no political party will endorse or fund one candidate or another until the primary," Knapp said.

The main event at the Conservatives in Crimson gala was the crowning of the Republi-King and Republi-Queen. Nominations were shouted out, and attendees got to cast their ballot discreetly, dropping raffle tickets in a bag for each candidate.

The 2022 title went to a married couple well known in southwestern Wyoming GOP circles: Island and Teresa Richards. The newly crowned king and queen were all smiles and "absolutely honored," but their views on the night's events and their party's recent actions show that the state's Republicans are not all walking in step.

Island, a former Sweetwater County Republican Party chairman, was unhappy with Correnti's politicking during the event's introduction, he said.

"This is a place to raise money to support whoever the people tell us their nominee is, and come August we'll know who that nominee is," Island Richards said.

Richards' displeasure extended to outside the Holiday Inn ballroom: "I think that what the RNC did and Wyoming leadership did taking sides in a congressional race was not appropriate," he said.

The Republi-King declined to say who he intends to cast his ballot for. But his wife, the Republi-Queen, was more candid.

"I will support whoever the nominee is," Teresa Richards said. "But I will vote for Cheney in the primary."