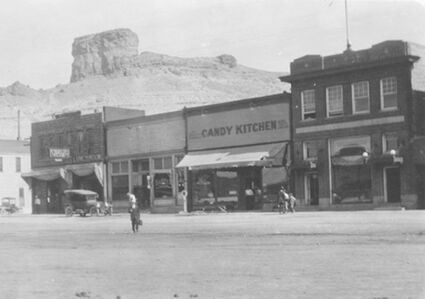 A Prohibition-era photograph of Railroad Avenue in Green River. At right is the First National Bank, next door to the Candy Kitchen. Prior to Prohibition and once again after its repeal, the Candy Kitchen was the Green Gander Bar, which remains open today.

A Depression-era April Fool's Day bank robbery in Green River and the chain of events that followed it are the subject of a new article on WyoHistory.org.

Early on the afternoon of Saturday, April 1, 1933, 29-year-old cashier Ed Taliaferro had just locked up the First National Bank on Railroad Avenue when two men rapped at the door. They were there to inquire about a rental property managed by the bank, they said. When Taliaferro let them in, one of them produced a gun and the pair forced him into the bank's vault, where they tied him up and helped themselves to just under $20,000 in cash...