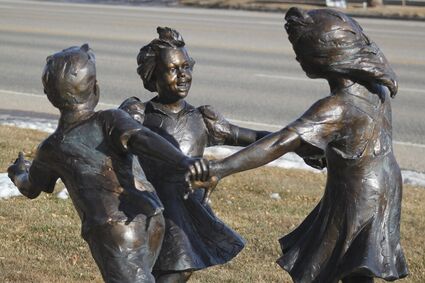 Sculptures can be found throughout Green River and a new digital tour from the city aims to highlight the 45 pieces of art within Green River.

You can't spend much time in Green River without seeing works of art. Some are easily recognizable, like the John Wesley Powell statue in front of the Sweetwater County Historical Museum. Others may be less familiar, like "The Rising" in Centennial Park. But while many residents pass by it on a regular basis, they may not be aware of just how much art is in the city.

"Even the locals may be surprised at the number of pieces of art that are around the community," Steve Core, the city of Green River's communications administrator, said.

Last spring, Core had the idea to do a project to highlight the artwork around town. He teamed up with Jason Brown, the city's Geographic Information Systems (GIS) analyst, to create the Green River Public Art Tour - a virtual tour on the city's website. Core went all around town to get photos of public art pieces, which Brown then put together using a story map template.

As they worked on the project together, both Core and Brown were surprised by the number of pieces in the tour.

"I didn't realize we had that much artwork in Green River," Core said. "I was just shocked, actually."

Brown noted he drives by many of these art pieces every day but hadn't noticed them until he began mapping them for the tour.

"I didn't realize there was that much out there," he said. "When we started putting this together I really had no idea."

Visitors to cityofgreenriver.org can scroll through the virtual art tour, which goes through 45 art pieces in the city, giving a photo along with the art piece's name, the artist and the location where each piece can be found. A map in the top left corner of the screen shows each piece's location in relation to each other. In the future, if the technology allows it, Brown would like to add a feature that allows users of the virtual tour to select an art piece and get directions to it from their location.

The art pieces are spread throughout the city, with many grouped in similar locations, like along Uinta Drive and in city parks.

Others can be found inside and outside of local buildings, including Green River High School, the Sweetwater County Library and City Hall.

Much of the art comes from local sources and has been put in the city by the Green River Arts Council. Many pieces came from events like the annual Art on the Green competition. Other pieces came from local artists like Rudy Gunner, who taught art at Green River High School for many years. Core credited the Arts Council for placing the artwork around the community, and said he wanted to put together the tour as a way to recognize their work.

"Art's always been a big thing," Core said, explaining how he noticed art was prevalent in Green River from the time he first moved here almost 40 years ago. "It's always just seemed to be very important to this community."

Core and Brown hope the virtual tour will not only make people more aware of the art that can be seen in Green River, but will also encourage both locals and visitors to get out and visit the art pieces in person.