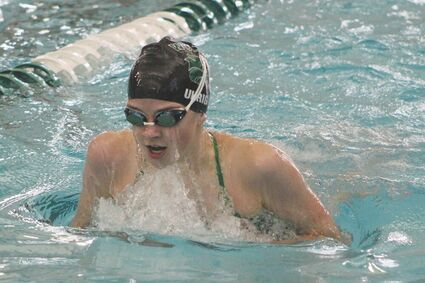 The Green River Wolves wrestling program continued its commitment to excellence during the winter 2021 sports season.

Those successes included the varsity team taking down the Rock Springs Tigers at a dual in Green River. While the annual Thoman Soda Ash tournament didn't end as well as the team would have liked, with narrow losses to Worland and Cheyenne East, the wrestlers dominated the other teams they took on.

The boys took second in their regional quad and finished fourth at state. Freshman Kale Knezovich earned a state title at the 106-pound division.

The boys swimming and diving team started the season as a new team in the 3A division, having moved from 4A. Despite the division shift, the team faced a lot of tough competition during their season.

The team was smaller than it had been in previous years, with 19 members overall, but the group showed their prowess in the pool by qualifying the entire team for the state swimming meet.

That team would take second place at State. Braxton Cordova and River Kirts excelled at the meet, finishing first and second in diving respectively, while assistant diving coach Rick Barker was named Assistant Coach of the year by his fellow coaches.

The Lady Wolves basketball team saw a significant amount of success during its season. Finishing with a 16-7 overall record, the girls were seeded in the regional basketball tournament and were the champions of the 4A Southwest Quad, having an undefeated 6-0 record in the quad. The girls would fight hard, but injuries to key players resulted in the girls finishing fourth.

The Wolves varsity basketball team finished their season in the first round of the state tournament, ending the season with a 10-13 overall record and a 2-4 regional quad record.

The boys improved throughout the season, battling their way to a fourth seed in the state tournament. That tournament ended with losses to Thunder Basin and Cheyenne East.

The boys soccer team was starting from scratch after nearly two years off the field due to the COVID-19 pandemic cancelling the 2020 spring sports schedule. The team also had a new head coach in Kahler Dawson, who worked hard to get the boys in fighting shape for the season.

The boys ended up struggling throughout the season, earning a single 6-0 win over Lyman and ending their year with 1-14 record. Dawson would leave the team after the season ended, with Jorge Salcedo taking over the role for the upcoming season.

Like the boys, the girls soccer program returned to the field after missing the 2020 season and had a new head coach in Chris Nielsen. The season was a tough one for the Lady Wolves, ending the season with a 2-12 record.

The wins came from a 3-0 win over Powell and a 7- 0 win over Lyman. Nielsen would leave the team after the season ended, with Matt Robles taking over as head coach for the upcoming season.

It was the first season for the Lady Wolves softball team. Headed up by head coach Blair Aimone, the team vastly improved over the course of the season.

While the season would end in a winless 0-10 record, the girls are poised for a better year in the upcoming year.

The Wolves and Lady Wolves track teams competed after losing the previous season to the COVID-19 pandemic.

Throughout the season, the teams' performances were punctuated with improved times and distances for several members of the teams. At the end of the season, one Lady Wolf, Lilly Munoz, was crowned state champion in the 300-meter hurdles. The event would be a successful one for the boys team as well, with Hayden Roberts taking third in the event. Roberts also took second in the high jump at State.

While COVID-19 impacted the team's early tournament schedule, the girls would struggle to consistently win sets.

Following the season, longtime head coach Rikki Shantz announced she would be stepping down from her role.

The school district has yet to fill the vacant head coaching position.

The Wolves football team also struggled throughout the season, ending it with a winless 0-8 record.

Despite that record, the Wolves played valiantly in their regular season games, with players Dylan Taylor and Jacob Schieve earning All-Conference nods for their contributions. Taylor would earn All-State honors as well.

The Wolves and Lady Wolves tennis teams continued to be top competitors in the 4A South conference this year.

The boys finished as the South Regional Conference champions while the girls took second at the regional tournament, with several members of both teams earning medals at the event.

The Lady Wolves would go on to finish 5th at State, while the Wolves placed sixth in a tournament that head coach Phil Harder said motivated and encouraged him about the future of the tennis program.

The Lady Wolves golf team had a successful season after they finished second at the 3A State golf competition in Lander. The girls were led by a second-place finish from Isabell Salas, a seventh place finish from Kaela Gibson and a 10th-place finish by Luci Adams.

The boys ended their season in 11th place with Ryker Mele finishing 20th as the top placed Wolf in the tournament.

Head coach Karly Eyre said the 11th place finish from the boys was the strongest showing the Wolves have had in a long time.

The Lady Wolves swimming and diving team earned their second consecutive state title in 2021, sharing the honor with Lander High School following a tie at State. The girls entered the meet as the 3A South Conference champions, defeating Lander in Pinedale 327-295.

Head coach Colleen Seiloff tells her swimmers every point matters in competition, later telling the Sweetwater County School District No. 2 Board of Trustees the swimmers had a chance to see that wisdom for themselves during the State meet.

The Green River High School cross country teams had a successful season marked by improved times for both the boys and girls. The season ended with the State cross country meet in Ethete.

The girls team placed seventh at the competition, with Isabelle Murdock, Madison Murdock and Lily Murdock leading the team with finishes in 26th, 30th and 33rd respectively.