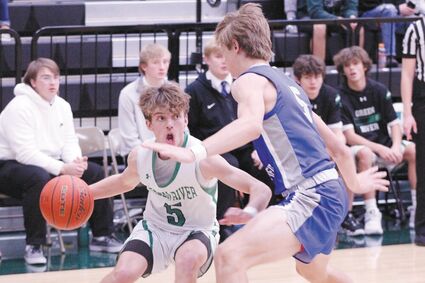 Caleb Lake attempts to work his way around a defender from Fruita Monument High School Thursday night during the Wolves' first game in the Flaming Gorge Classic. The Wolves won all three of the games they played at the event.

"We had some glimpses of really good offense and defense throughout that (Casper) tournament, but we were inconsistent and I don't feel like we played four solid quarters in any of the games during the Oil City Tip Off," head coach Laurie Ivie said.

During the Flaming Gorge Classic, Ivie believes the Wolves showed a better representation of what the team is capable of.

"I was proud of how the boys performed during the FGC," she said. "We cle...