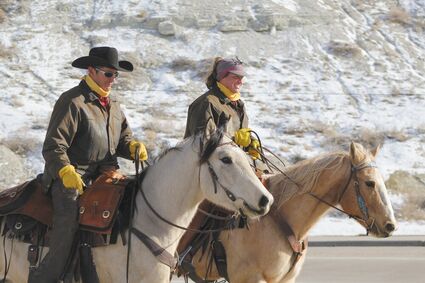 Melissa Misner and Andy Misner ride out of Green River during the annual Christmas card ride conducted by the Sweetwater Pony Express Riders.

Melissa and Andy Misner swung into their saddles outside the post office Saturday morning. Their horses were loaded with two mochillas and five saddlebags full of Christmas cards. The Misners smiled as they rode down Uinta Drive, escorted by two Green River Police Department vehicles.

After making their way past Interstate 80 and over to the old Lincoln Highway, they made the first handoff, transferring the Christmas cards to Reed Misner and Anne Cheney, who then began the ride through the snow on their stretch of the journey to Rock Springs.

The Sweetwater County chapter of the Pony Express Association has been bringing thousands of Christmas cards from Green River to Rock Springs on horseback for 20 years.

Cheney led the group of seven riders who transported the Christmas cards in shifts this year. She described the group as her team from the Sweetwater chapter, explaining that they trailer together. The riders transported the Christmas cards by dividing into small groups that each rode for one portion of the way before transferring the cards to each other. Then they rode the last stretch into Rock Springs all together.

A long-time member of the Pony Express Association, Cheney no longer lives in Sweetwater County, having moved to Idaho after she retired. However, she still comes back to Wyoming to take part in the Pony Express rides whenever she can.

When asked about her least favorite part of the Christmas card ride, Cheney quickly replied "the wind." However, she said this year's weather, which was clear and cold but not too windy, was beautiful.

"My favorite's when the snow is coming down perfectly," Melissa Misner said. "Three years ago, the flakes were so big and everything was so peaceful."

However, Misner is fine with other weather conditions, too.

The Christmas Card ride tends to be a relaxed and fun event for the riders. Sweetwater Ride Captain Howard Schultz said the ride usually takes around two and a half hours, but sometimes longer.

"We don't run like they do in the summer," Schultz said. "This is just a joy ride."

The summer ride Schultz referred to is the annual Pony Express Association re-ride, which transports mail from California to Missouri, alternating which state is the starting and ending point each year. The association has participants in California, Nevada, Utah, Wyoming, Colorado, Missouri, Kansas, and Nebraska.

The Sweetwater County chapter covers 104 miles during the summer ride, traveling between Granger and Atlantic City.

Anyone with their own horse can become a member of the Pony Express Association, Schultz said. New members receive special patches and a Bible to carry with them on rides, like the original Pony Express riders did. Each year members who participate in the summer ride receive a commemorative pin and a stamp in their Bible.

The summer ride is the Pony Express Association's main event, but the Christmas Card Ride was something the Sweetwater Chapter decided would be fun.

"It's just something to do during the winter when we're waiting for summer to get here," Schultz said. 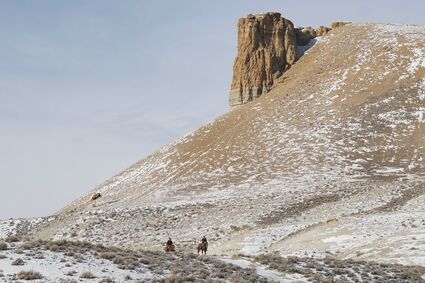 But since the tradition began in Green River, Wyoming, it has begun to spread.

"It pretty much started with us," Schultz explained. "Other divisions and everything, they caught on and they have their own."

Now, Southeast Wyoming hosts a ride as well, which was on the same day as Sweetwater County's this year. Casper also does one, and the event has begun to spread outside Wyoming to other states, such as California and Nevada.

In Green River, the annual ride continues to be a tradition, not only for riders but for many community members who come out to see it. Residents gathered in the post office parking lot Saturday morning to watch the horses leave, including Ken Lacey with his wife and his five-year-old grandson. Lacey said they come to see the Pony Express every Christmas, and contribute about 50 Christmas cards to the mochillas.

"This is a good event every year," Lacey said.