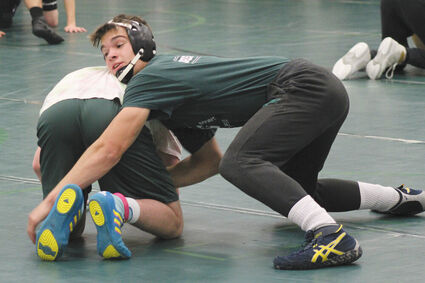 Zach Weipert grapples with Alex Sailors as the two participate in a drill during practice Tuesday evening. Head coach Josh Wisniewski is excited about the new and returning talent to the Wolves wrestling program.

The Wolves' wrestling program is putting the work into having a successful season and head coach Josh Wisniewski is feeling good about the kids and the team's composition this season.

"We have a great group this year," he said.

Wisniewski is happy with the number of wrestlers coming out for the season, saying the group looks to have a great depth at some weight classes. He said some of the athletes had competed in middle school and with the Green River Grapplers program, but they also had a number of students joining the team without prior experience.

The team has a number of returning wre...