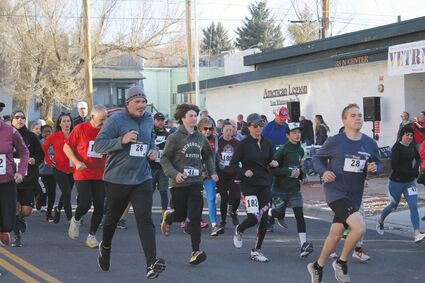 Runners take off as they start the Veterans Freedom Race Saturday. The event is a 5K aiming to honor veterans. This year was its fifth run.

The morning began with a 5k and 10k race starting and ending at the American Legion Tom Whitmore Post 28 on North Center Street. Runners could then enjoy a pancake breakfast cooked and served by the Sons of the American Legion and a medley of songs performed by the Green River High School band.

The morning wrapped up with a one mile walk where veterans were led by a color guard from Green River Boy Scout Troop 312 and escorted by the Green River Girl Scouts.

"It's a community event," Sherry Bushman said. Bushman is a Green River City Council member and serves as the vice chair of the American Legion Auxiliary, Tom Whitmore Post 28, as well as the Director of the Veterans Freedom Race.

Bushman started the Freedom Race five years ago when she had the vision to host a run in conjunction with Veterans Day that would directly benefit local veterans.

"I'm a runner, I like marathon runs, and it's just something that I thought we should do to do fundraising," Bushman said. "And it just kind of took off on its own."

The Veterans Freedom Run usually has a good turnout, with roughly 85 to 100 participants, according to Bushman.

Funds raised by the run go directly to supporting local veterans through the American Legion, and specifically go towards feeding veterans during the upcoming holidays, particularly providing food during Thanksgiving and Christmas, Bushman explained. Leftover funds may also go toward other things, like paying bills, but they all go towards meeting veterans' needs.