Tearing the tanks down 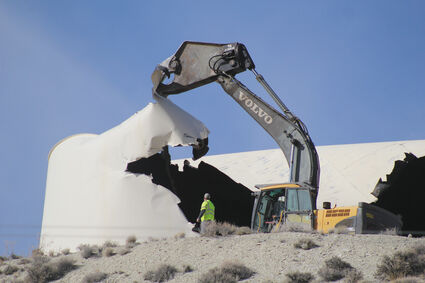 Workers tear down a water tank above Castle Rock Medical Center Monday afternoon. The tank was one of two that were planned for demolition by the city.

Residents driving up Uinta Drive this week may have noticed a white water tower on the hill above Castle Rock Medical Center being torn down.

This tank is one of two that the city of Green River is having removed. The second tank is at the end of Knotty Pine Street.

Both of these tanks "have been out of service for over 20 years," according to Mark Westenskow, the city's director of public works.

"These particular tanks were used at a particular time, but they've become obsolete," Westenskow explained. "So they were taken out of service, both from a size perspective and also from the zon...