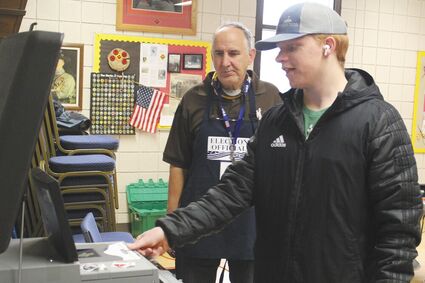 Marcus Moffit slides his ballot into a voting machine as John Pawleska, an election judge, watches. Residents voted in a special election to determine if they would support a general purpose sales tax Tuesday.

Sweetwater County voters have spoken and they do not want a 1% sales tax.

Tuesday's special election resulted in a massive loss for tax, with unofficial tallies showing 5,359 against and 1,300 for the tax, out of 6,662 total ballots received.

"I think voters spoke clearly that this general purpose tax proposal is something they're not willing to support," Sweetwater County Commission Chairman Randy Wendling said.

Wendling said the commissioners gave residents a chance to have their voices heard by approving the special election, something Commissioner Mary Thoman agrees with.