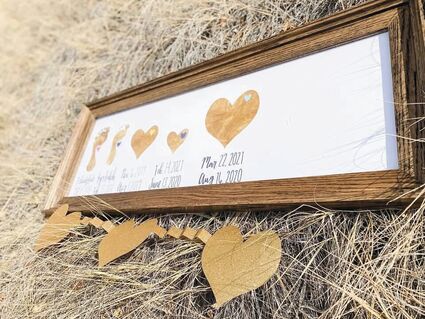 A display made by Courtney Swanson and her family represents their living children and the babies they have lost to miscarriage. Courtney's husband Tim built the frame. They put the two living children's foot prints, names and birthdates as well as three hearts to represent the three miscarriages. The hearts are different sizes to represent the different sizes of babies they were in gestation. The tiny colored hearts in each one are the birthstone month colors of their due dates. Their due dates are at the top with their passing dates underneath. "It was important for us to have something tangible to remember them by that we could make together as a family," Swanson said.

October is a month of awareness for multiple causes, but one that is often overlooked is Pregnancy and Infant Loss Awareness Month. The tragedy of losing a baby affects one in four women and impacts families across the country, but remains an often undiscussed topic.

Courtney Swanson is one Green River resident wanting to change that fact in order to bring more understanding, as well as hope and healing to those who've been impacted by it.

President Ronald Reagan first declared October to be a month of awareness for pregnancy and infant loss awareness on Oct. 15, 1988. Oct. 15 is specific...