Swimmers 'tuning up' to stay on top 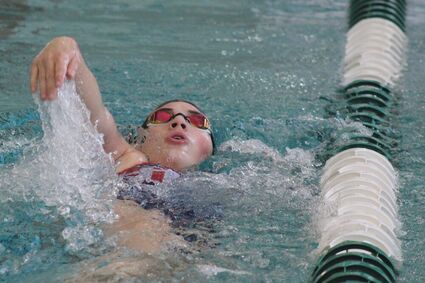 Tanith Smith works on her backstroke during a swim team practice at Green River High School. Smith, a freshman, has been one of the highest scoring swimmers this season.

The Green River High School swim team has had an impressive season so far, and they're "tuning up" to face the last three weeks.

The Lady Wolves brought home another win last weekend when they faced six other teams in Rawlins on Saturday, beating the home team by 132 points. Coach Coleen Seiloff said it was a change of pace to only compete one day after five days of practice, but the girls swam well.

"We're starting to get towards the end of the season, they're tired, but they are working, so I'm pretty happy with where we're at right now," Seiloff said.