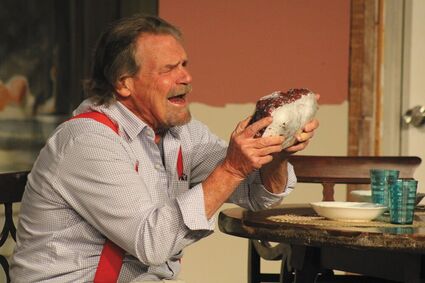 TJ, played by Donovan Rawlings, laments over a package of meat after he realizes it's expired and he can't make his chili during the "guys' weekend" with his friends.

Friendship, the challenges of aging, and a battle of the sexes are all at the heart of "Beer for Breakfast," the Actors' Mission's newest production opening this weekend.

The play tells the story of three retirement-age men who go to a cabin for a guy's weekend when their friend's wife shows up instead of him. The men feel that Jessie, the wife, has intruded on their fun, and a showdown full of grade school games and challenges ensues.

"Each character has a backstory that I think we all can relate to," Erika Hunsaker, the director of the play, said.