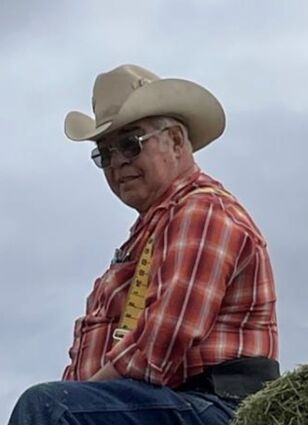 Eddie Lopez saddled up for his last ride September 12, 2021 surrounded by his family.

God Broke the mold when Eddie was born to the late Ernesto and Emily Medina Lopez on October 17, 1943 in Ranchos De Taos, New Mexico.

He was the oldest of twelve children coming from a large family also came with large responsibilities. Eddie was sent to Wyoming when he was only ten years old to work on the Thompson Ranch. Eddies early years instilled in him the love of agriculture and the understanding that hard work was required to enjoy the benefits that life had to offer. Those younger years as a sheep herder, farmer to rancher not only built tenacity but also broad shoulders and strong hands.

Eddie was an accomplished and intelligent man who worked hard for his family. Eddie was a truck driver for years. He drove semi-trucks all over and hauled for many companies like John Bunning Transfer. After his truck driving days, he started his own business, Lopez Hay and Horses, and also worked in the oil field at Union Pacific Resources until his retirement.

Two hours after he retired from Union Pacific Resources, he was offered a job with Sweetwater County Sheriff's Office as a special deputy. Around the same time Eddie became the Ranger Rider for the Wyoming Grazing Association.

Eddie's strong hands were built for a gentle hug and a strong hand shake. The years of sun and sweat weathered his face but his genuine smile could thaw the coldest heart. He loved his people and all animals from his cats, cows, pigs, sheep, chicken, dogs, to all of his horses.

His passion for life was surpassed only by his devotion to the love of his life who he married and adored for 40 years and left behind to carry on the family traditions. Eddie and Debbie were married February 14, 1981 in Rock Springs, Wyoming. As the chant goes "First comes love, then comes marriage, then came five kids in the baby carriages. Laurie Achenbach (Joe), Michelle Lopez, Judi Lopez, Emily Lopez (Justin Miller), and Ernesto (Karli) Lopez. For his kids, living in the shadow of a legend was not always easy, but it was always entertaining. No doubt Eddie's legacy will continue to live on with six grandkids. The grandkid clan includes: Nevada Lopez, Izayia Lopez, Corbin Lopez, Mia Lopez, Noah Achenbach and Ezra Achenbach.

Eddie's love of the family was closely followed by his devotion to this country and community here in Rock Springs. Never a spectator he turned his love of community into action through leadership and participation in many organizations, including 4-H. One would think these youngsters would be wary of this man with a gruff appearance and a booming voice, but kids of all ages loved him and his stories.

Eddie was a cowboy who filled a room with charisma and energy, but with the rare quality of making each person feel as if he were speaking directly to them. His ability to make people laugh, smile, cry, and "feel" was a gift from above. Today the angels have a new entertainer in their midst and I am sure they are rolling in the aisles.

Eddie's family is forever in debt to all the friends and relatives (in-laws to out-laws) who loved him all these years. We could not have done it without you. Sorry grandpa and grandma Lopez, grandpa and grandma Schmidt, three brothers, Frutoso Lopez, Eloy Lopez, Juan Ernesto Lopez; two brothers-in-law, Doug Schmidt, Kirk Wilson, one sister, Glenda May Lopez one sister-in-law, Georgie Duran, and great uncle Cliff and Ida Meyers, we did our best to keep him out of your hair as long as we could. He's back in your corral now. Good ride cowboy.

Private family services will be held.