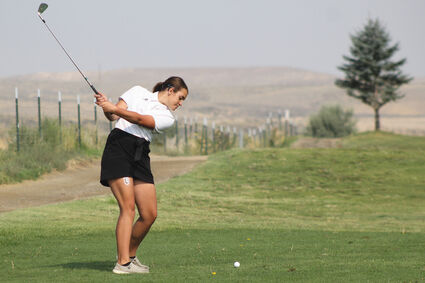 Elana Barrera practices her swing during the Green River Home Invitational. The GRHS girls golf team has remained dominant throughout the season.

The Green River High School golf team is headed to the state tournament next weekend after a strong season, with the girls leading the way.

The girls team has won all but one tournament this season. At the Star Valley Invite they came in second, but still had one of the lowest overall scores the team has seen. Most recently the team won the Conference tournament in Pinedale last weekend.

Isabell Salas has had the strongest season, coming in first individually at every tournament e...