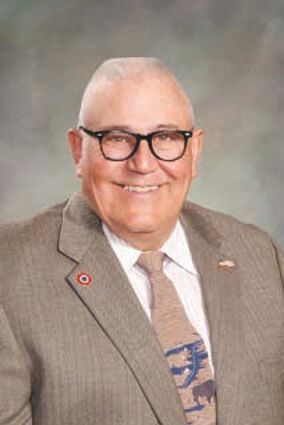 Stan Blake was chosen to receive the Labor Leader of the Year award at the Wyoming State AFL-CIO convention last weekend.

The AFL-CIO (American Federation of Labor and Congress of Industrial Organizations) is a federation of 56 national and international labor unions. The Wyoming council is "one of nearly 500 state and local labor councils," according to wyomingaflcio.org.

The Wyoming AFL-CIO hosted its 58th annual convention in Sheridan last weekend. The convention takes place each year the weekend after Labor Day. Last year's event was limited and held virtually due to the COVID-19 pandemic, so this year's convention combined awards and honors from both 2020 and 2021. During the convention, Blake received the 2020 Labor Leader of the Year award.

"I was honored," Blake said. "I was literally almost brought to tears. They started to flow a little bit."

Blake served as a Wyoming legislator for 14 years representing House District 39 in Green River. He also works for the Union Pacific Railroad and has worked as the State Director of the International Association of Sheet Metal, Air, Rail and Transportation Workers (SMART) transportation union Wyoming Legislative Board for roughly a dozen years.

"All this could never have been done without the support of my wife, Terri June Blake," Blake said.

Blake reckons that, out of his 14 years in the legislature, he was gone from home for two and a half years. He stressed the importance of his wife's help and sacrifice throughout his life and work, contributing to all he's been able to accomplish.

When Blake was given the Labor Leader award, several people present at the convention gave speeches about Blake and the significance of the work he's done.

"It was a unique moment, hearing all the nice things said about me," Blake said.

Jan Able, a railroad worker from Ten Sleep, nominated Blake for the award. The nominations were kept secret until the award was presented, and Able shared a photo of Blake when he was younger.

"The smile is the same," Blake said with a laugh, looking back at the photo.

Able also spoke about the work Blake has done over the years to help railroaders, such as fighting for a two-person crew bill to be passed in Wyoming. This bill would create a state law requiring a minimum of two people on a train, a conductor and an engineer.

Chauffe Schirmer was another person who spoke about Blake's impact. Schirmer is a national representative for the Utility Workers Union of America, and was elected at this convention to the Wyoming State ALF-CIO Board. She is a second-generation utility worker originally from Rock Springs who is now a constituent of House District 39, and was a constituent under Blake when he served as a legislator.

Schirmer first met Blake through work he did with the Equality State Policy Center. Blake worked with the ESPC for 16 years, helping teach classes that give Wyoming citizens the chance to learn how to be a citizen lobbyist and be involved in the legislative process.

"I realized how accessible the legislature is because of Stan," Schirmer said, saying Blake shared his knowledge at labor day picnics and the ALF-CIO state convention.

As Schirmer got to know Blake better and found more common ground with him through their involvement with unions, she learned how much he has done for workers.

One example she gave was how Blake helped increase benefits paid out by Workers' Compensation when there was a surplus. When others suggested the excess funds go towards insurance, Blake made sure the funds increased the benefit payout to the injured workers who needed it.

Blake has also consistently fought for the safety of railroad workers and railyards, which is also important for community safety, according to Schirmer.

"I know Stan to be a strong advocate for the rights of not just railroad workers but all workers in general, and our families," Schirmer said.

Blake explained that his involvement with unions evolved over time. He was told to join a union when he started working for Union Pacific. After a few years of paying union dues he decided he wanted to know what that money was being used for, and he has been actively involved ever since.

Blake believes unions are rebounding. He explained how unions got their start and became influential at the turn of the century and through the early 1900s, and he believes they're coming back and becoming more important again. Unions help ensure workers receive living wages and good benefits, and they help the economy, according to Blake.

And, when it comes down to it, Blake said, "it's all about keeping the workers safe."