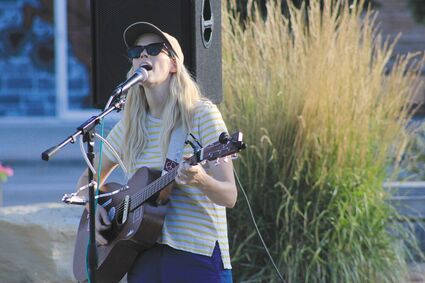 Shandryn Trumble performs to residents at the weekly Concert at the Clock Tower Thursday evening.

"I will play for anyone, anywhere," Shandryn Trumble said as she set up for her performance last week.

Being the highlighted performer at the weekly Concert at the Clock Tower, Trumble had a chance to play and share her love of music with Green River's residents.

Trumble is a Green River native who began pursuing music early. Growing up in a musical family played a big part in that.

"There was definitely a love and appreciation for music in the house," Trumble said. She took piano lessons as a child, but was always "obsessed with acoustic guitar."

Her chance to learn guitar started in 5th grade when her teacher, Mr. Ellenson, would give her free lessons during recess. Trumble said she owes him credit for getting her interested. She got her own guitar for her birthday during her senior year of high school, and was able to take a guitar class for a week before she had to switch to a different class she needed to graduate. Other than that, she hasn't had any formal training and has been self-taught. She started "hitting it hard" at the end of college and has been pursuing music ever since.

In addition to numerous local shows, Trumble has played in Utah and Colorado, where she has friends. She also spent about a year busking on the streets of Portland, Oregon. She would play between six and eight hours a day, which was her full-time job. She said the experience helped her build her confidence and get used to playing in front of a crowd. Trumble said she absolutely loved busking and, since she plans to always have a guitar, she "would totally do it again."

For now, Trumble plays whatever shows she can. At large events where she's trying to draw a crowd, she will play covers of popular songs. But Trumble prefers when she can play the music she wrote, which she was able to share during her Thursday performance.

Trumble has released an album, entitled "Five Years," which contains all original music. She did everything herself, from recording to producing to editing. The album is available on popular music platforms, including iTunes, Spotify, and Amazon Music. Trumble also has several videos on YouTube.

Along with her CD, Trumble sells merchandise at her shows, such as T-shirts and stickers, which she designed herself. Having a degree in art, Trumble is able to do all her own design work, from her album to her merchandise to her website.

Trumble was supposed to be the first performer of this year's Concert at the Clock Tower series, but on that first night Sweetwater County was under a high wind warning, and the wind was too strong to host the concert. URA/Main Street Administrator Jennie Melvin said they rescheduled so Trumble would have the chance to perform.

The concert series started in June and will continue through the end of August. According to Melvin, the concerts at the clock tower could extend into September, if the weather cooperates.