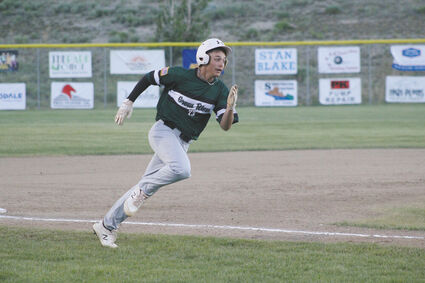 Richard Peterson heads for first base during earlier action in Green River. The Knights are the first seed in the West District American Legion tournament this weekend.

The Green River Knights A team are standing tall as they head into the West District tournament this weekend in Cowley. The Knights are the top seeded team in the division, allowing them to take on the winner of the first-round game between Powell and Buffalo Saturday morning.

Head coach Benjamin Lail said the team has excelled throughout their conference, earning an 8-0 record in conference play.

Lail part of that success if attributed to how well players have gotten along with one another than they have in the past, improving their a...