Building a league of their own 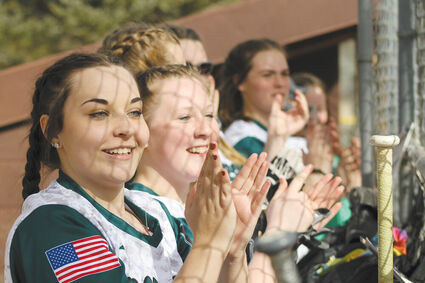 Adara Akin and Adyson Law, players for the new Lady Wolves softball team, cheer for their teammates during a scrimmage Friday afternoon. The girls will take on their first team, Kelly Walsh, Friday at 3 p.m. at Veteran's Park.

On a warm Friday afternoon, a few dozen people were gathered at the Veterans Park ballfield to watch the girls get their game on.

The newest addition to the sports offered by Green River High School is girls fastpitch softball. The team starts its season this Friday against Kelly Walsh in a home game at Veteran's Park.

During a uniformed scrimmage Friday, the team competed against itself as coaches gave pointers and tips to the girls in preparation for that first game. They weren't the only ones working out what to do for that game.

On the sidelines, a few of the players were working out some cheers to sing and chant to help their teammates on the field.

"You got it bay-bee," Adara Akin sang to a batter on the plate, paying particular attention to how she said the word 'baby,' drawing it out at the end of the cheer.

She said she wants to make sure everyone is positive while competing because a lack of positivity can end up hurting the team. She has played softball for seven years, starting with a local rec league and later playing for the Green River Chaos, the traveling softball team.

"I just love softball," she later said, commenting about how she enjoys the family atmosphere she finds with her teammates. As far as helping bring softball to the high school level, Akin said she's happy to be a part of the first team.

"It feels very good," she said. "I'm excited to start something new."

The team is coached by a veteran group headed up by Blair Aimone. She was an MVP in Colorado for two years playing for Sterling High School's softball team. She also earned defensive player of the year accolades from 2002-2004. Playing for the Western Nebraska College team, she was the freshman player of the year in 2006, as well as earning All Conference and Academic All-Region selections.

At Chadron State College in Nebraska, she continued to stand out, earning Outstanding Defensive Player of the Year in 2007 and was an All-Nebraska NCAA Division II Honorable Mention Player in 2009.

"We are extremely excited to start Green River High School softball with Blair Aimone at the helm. Blair brings a high energy level and a great softball background to our program," Athletics director Tony Beardsley said when announcing the coaching staff in August.

She is joined by Trin De La O, Alissa Davis, Mark Hyde and Danielle Kendall as assistant coaches, each of whom have their own successes in softball and baseball.

All games are scheduled to take place a Veteran's Park