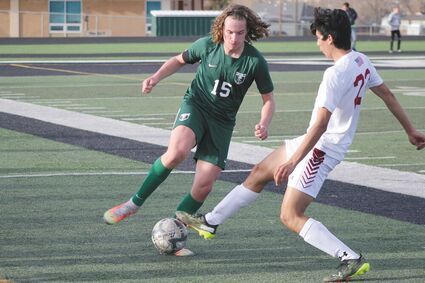 achob Fuss attempts to pass to another Wolf Friday during the boys soccer team's first match of the year against Star Valley. The Wolves lost the first two games of the season, being defeated by Star Valley 4-0 and Evanston 3-1.

The weekend didn't go the way the Wolves would have liked, but second chances are around the corner for the boys soccer team.

The boys faced tough squads from Star Valley and Evanston, taking losses from both teams at home. The Wolves lost 4-0 to Star Valley Friday and 3-1 against Evanston Saturday.

The sole Green River goal was scored by Andrew Santhuff off of a penalty kick.

Head coach Kahler Dawson said the team had some offensive and defensive rust and anxiety playing their first game in two years. He also thinks the speed of which both opposing teams played surprised them as well. He...