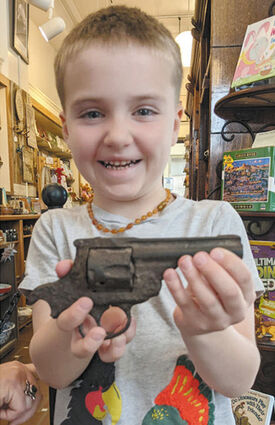 Danny Tuttle of Green River with the Iver Johnson Safety Automatic revolver left to him by his great grandfather, who found it in the desert near Rawlins in the 1940s.

A budding historian brought a century-old handgun to the Sweetwater County Historical Museum for examination this week.

Six-year-old Danny Tuttle of Green River, a regular museum visitor, is the owner of a badly rusted revolver that was found hidden beneath a rock in the desert near Rawlins by his great-grandfather, Jesse Lloyd Tuttle. The revolver was discovered in the 1940s. Museum staff determined the pistol to be a .38-caliber Iver Johnson Safety Automatic revolver, which first appeared on the market around 1896.