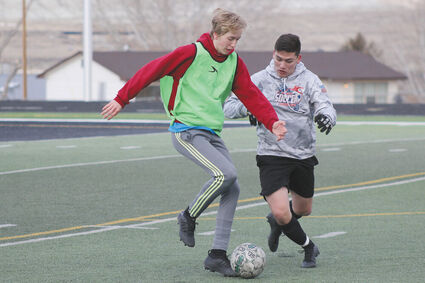 Shawn Arellano and Korbin Arnell make plays for the soccer ball during a practice Tuesday at Wolves Stadium. The Wolves and Lady Wolves will play their first games Friday.

The Wolves soccer team will be returning to the field Friday as they start their season against Star Valley in a home game. Action starts at 5 p.m. at Wolves Stadium.

They will then take on Evanston Saturday in a second home match scheduled to start at 1 p.m.

Like the girls team, the boys are headed up by a new head coach in Kahler Dawson.

Before becoming the head coach, he assisted the girls team for a year and operated a soccer development program.