Girls seeded No. 1 in tournament 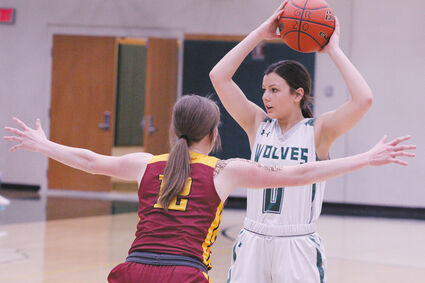 Kayde Strauss looks for an open player Saturday during action against Star Valley. The Lady Wolves defeated the Lady Braves 44-38.

A strong finish in their last two of games has given the Lady Wolves basketball team the top seed in the regional tournament Thursday.

They will take on fourth-seeded Jackson at home Thursday. Action begins at 1 p.m.

The Lady Wolves are the champions of the 4A Southwest Quad, being undefeated with a 6-0 record against other teams in the region. However, that doesn't mean the Lady Wolves will have an automatic invitation to State. They must beat Jackson to earn a spot at the tournament. A loss here will end their season, while win will position them in a second game at 6 p.m., Thursday against the winner of an Evanston-Star Valley game. The winner of that last game then travels to Riverton for a game with the top team in the northwest quadrant Saturday to determine the No. 1 seed for the 4A West at State. Thursday's meeting with Jackson will be the third time the Lady Wolves have taken them on. Green River has beaten the team each time they've played.

For head coach Rick Carroll, this situation is the goal he's had all season.

"It's nice to be in this position," he said.

There is still some work that needs to be done before Thursday's game Carroll admits. Right now, he sees the girls playing inconsistently, playing well in some quarters, but unable to keep that momentum a full game. In last week's win over Rock Springs, the Lady Wolves entered the fourth with a 13 point deficit, only winning the 62-60 game by clawing their way out with 29 points scored during the quartered and punctuating the night with a buzzer-beating basket from Gabby Heiser. Against Star Valley Saturday, the teams had a low-scoring game that favored Star Valley until the final minutes when the Lady Wolves were able to capitalize on multiple free throw opportunities coming from Star Valley fouls.

Overall however, Carroll is happy with the improvements his varsity players have made over the course of the season. He said the seven players getting varsity minutes have come together as a team and do the jobs required of them. He's also happy with how well the girls move the ball as they play.

Going into these final games of the season, Carroll said he hopes to see the best basketball they Lady Wolves have played all season, believing the girls will do everything to the best of their abilities.