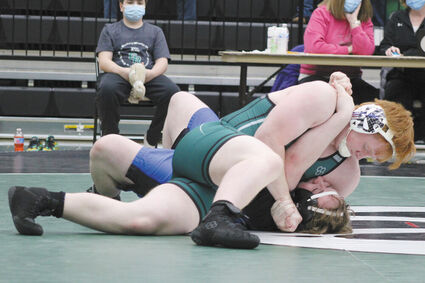 Deylin Miller pins his opponent Friday while competing at the 3A Southwest Regional Quad in Green River. Miller took first in his weight class.

With the State wrestling meet next week, the Wolves' qualifying wrestling team has little time to fine tune their strategies, but head coach Josh Wisniewski isn't worried about how they will fare in their final week.

Wisniewski said the team's goal was to qualify 85% of their members for the showdown in Casper.

"It's pretty neat we were able to do that," he said.

Four Wolves were named the champions of their weight classes: Kale Knezovich at 106, Thomas Dalton at 120, Conner Todd at 132 and Deylin Miller at 220.

Competitors finishing in the top four received a spot at the Staet tournament...