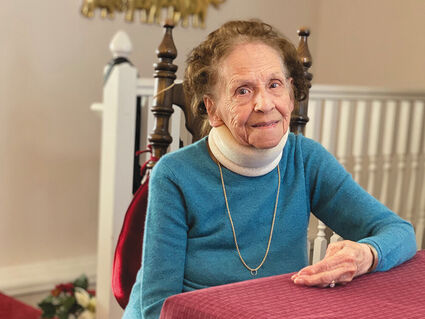 Dora Lopez talks about her life as a welder during the World War II "We Can Do It" Campaign. She recently received her second dose of COVID-19 vaccine during a 70 and older clinic at Memorial Hospital of Sweetwater County. She said it "didn't hurt at all."

Dora Lopez stood near her husband at the clerk's window at the shipyards. Paying his union dues was one of several errands the couple tasked themselves with that day in Portland, Ore.

She wasn't paying much attention until the union clerk spoke to her.

"Are you working?" he asked Dora, who shook her head. "Do you want to work?"

It was part of the United States War Production Co-Ordinating Committee's "We Can Do It" campaign. Rosie the Riveter would become the campaign's star.